The Demolition of Sanjiang Church in China: When Law Meets Religion

In April 2014, Sanjiang Church, a Christian church in Wenzhou city in China, was demolished due to building codes violations. The church, its annex and parking lot covered more than 10,000 square metres, where as it only had permission for 1,881 square metres. 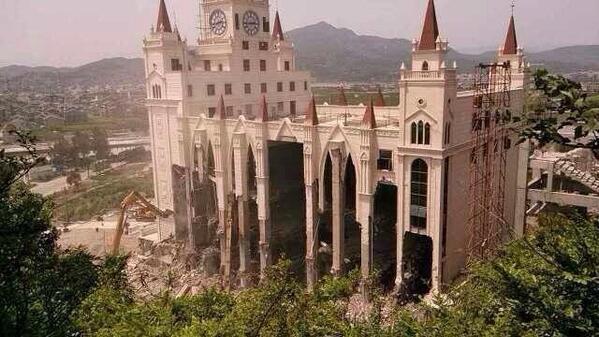 The demolition by the Yongjia county government attracted much attention, and some Western media even portrayed it as the persecution of Christians. The misunderstanding and accusation it caused shows how things can be tricky when law meets religion.

On the one hand, a Christian church does not enjoy special treatment under the Law of Land Administration of the People’s Republic of China (PRC) and Urban and Rural Planning Law of PRC.[1] On the other hand, demolition of such a church may touch upon sensitive religious issues and affect the relationship between Christians and the Chinese Government. Still, the Sanjiang Church incident could have ended more positively -or even been avoided- if church members and local officials strictly followed the law in the first place, or conducted effective communications after the problem surfaced.

Growth of Christianity in China

The Sanjiang Church was located in Yongjia county, Wenzhou city, in south eastern Zhejiang province of China. Situated on the coast of the East China Sea, Wenzhou was the frontier of China’s reform and opening up policy.[2] It is well known for its flourishing private economy and “boss Christians”, who are wealthy Christian entrepreneurs who have greatly promoted the development of local churches.[3] The city is considered to have the highest percentage of Christians in China, about 15 percent Christians in the population.[4]

Besides Wenzhou, Christianity is growing rapidly in other parts of China. According to the statistics by the Chinese Government and the China Academy of Social Sciences, the number of Christians grew from 700,000 in 1949(the year the People’s Republic of China was established), to more than 23 million in 2010.[5] The latest Annual Report on China’s religion states that Christianity has already become the second largest religion in the Han ethnic area in China, while Buddhism remains the primary religion.[6] This may partially explain why the destruction of a Christian church triggered so much debate.

The Church and the Demolition Campaign

The old Sanjiang Church, which was about 500 square metres, was built in 1985 and declared unsafe in 2004. In order to provide a bigger place for increasing numbers of worshippers, the church leaders applied for a new Sanjiang Church and the construction started without all of the legal documents in place. The local government turned a blind eye to the construction and the church was even called a “model project” by the Yong jia county.[7] The construction was completed in 2013 at the cost of more than 20 million yuan (US$3.2 million). The gigantic church rose more than 50 meters and was five times larger than the permitted size.

Some reports noted that while the church was built under the acquiescence of the government at the county and city level, an official from the provincial level found the large cross atop of the church inappropriate and disturbing during his visit. The church members and local worshipers refused to compromise by taking it down temporarily or making it less obvious. The provincial government then ruled that as the church violated the building codes, it should fall under the scope of the “three revise and one demolition” campaign.

The “three revise and one demolition” (san gai yi chai) campaign was carried out by Zhejiang province a year before the demolition of the Sanjiang church. It aimed at hastening urbanization and “building a more beautiful Zhejiang” through revising old residences, factories, village-in-city and demolishing illegal construction. The demolition covered all kinds of illegal constructions, including buildings that belonged to public institutions and state-run enterprises. Except for those considered to have cultural or historic values, constructions of a religious nature were treated with no differentiation. Some Christians expressed their concern that this project would be used to target Christian churches. However, according to the official data from 2014, only 0.26 percent of the total area that had been demolished or revised related to religion or folk belief, among which only 2.3 percent related to Christianity.[8]

Regardless of whether the Sanjiang Church problems began with the visit of an official, or was due to the bad timing of the demolition campaign, one undeniable fact is that the church violated the law. The local government was responsible for this because it failed to supervise and stop the construction from the beginning. At some point, the church was even encouraged so it could become a landmark building next to the “most beautiful highway” that Yongjia county tried to create. The church members thus took chances with the construction and believed that though the church did not have the required land use and building permits, it would be officially approved or tolerated in the future because “Wenzhou’s officials have always been very tolerant toward Christianity.” [9]

Lessons Learned from the Demolition

After the demolition, five local officials were investigated for negligence. Although both sides made mistakes that led to a dramatically oversized church, a lack of efficient communication made the situation worse. The vice county mayor of Yongjia said that according to its procedures, the church was first asked to revise and demolish part of the construction before 31 March 2014.[10] The church only demolished 500 square metres, but promised to continue the work on 3 April. Without making any progress, it then promised again on 7 April and the deadline was postponed to 22 April.

While the local government found this frustrating, local worshippers were also confused. Many found it hard to accept that their beloved church – once praised as a “model project” – was suddenly an illegal construction. On 21 April 2014, thousands of Christians gathered in front of the Sanjiang Church to protect it and the cross. Some called for support from Christians in other provinces and asked for more attention from Western media through the internet, which further complicated the situation and increased tensions. Despite several attempts to reach a compromise, no final agreement was achieved between the local government and church leaders. The whole church was torn down on 28 April 2014.

Both sides could learn some lessons from this incident. For the local government, if it had been more sensitive to the needs and concerns of Christians, and willing to communicate with them in a better way and at an earlier stage, the demolition would not have met with protest. Similarly, if church leaders and worshippers had not overlooked the fact that the church violated the law and were more open to alternative solutions, the church might still be standing. However, it should be noted that this incident was also influenced by other factors such as the relationship between the central and local government, and a shortage of land.

Law and Christianity in China

The demolition of Sanjiang Church, together with the “three revise and one demolition” campaign, triggered debates on the rule of law and religion. It was discussed within both the policy-making and academic circles in China and remains a hot topic. On 23 April 2016, the National Religious Work Conference in Beijing promoted the rule of law in religious work. The importance of this conference was underscored by the fact that it was attended by five out of six members of the Standing Committee of the Political Bureau of the Communist Party of China Central Committee. This was the first time such a conference has taken place since 2001.

In the speech at the conference, Chinese President Xi said that the Government’s regulation of religious affairs must be in line with the law and that the legitimate rights of religious people must be protected. Religious people, equally, should abide by Chinese law and regulations.[11]In academic circles, research on the ‘localization’ (Zhongguo hua) of Christianity has attracted much attention. It is aimed at incorporating Christianity into the culture, nation, and especially Chinese contemporary society.[12] Compliance with the law and state policies is considered an inseparable part of ‘localization’, which requires political identification, accommodation in society, and blending in culturally.

To conclude, the Sanjiang Church incident tested not only the rule of law, but also the wisdom of the local government and Church leaders. When facing such situations, efficient communication should be conducted with patience and understanding from all sides.

[2]  The policy of “reform and opening up” was initiated by Deng Xiaoping in 1978. Since then, major efforts have been made to readjust the economic structure and reform the economic and political systems.