Public, Power and Play: Notes on doing ethnographic fieldwork in a contested neighbourhood in the Netherlands

When googling “Schilderswijk Den Haag”, it is this picture that comes up next to the Wikipedia description of the neighbourhood in the Dutch city of The Hague. The rhyme “Geen Jihad in de Straat” is translated as “No Jihad in the Street”. 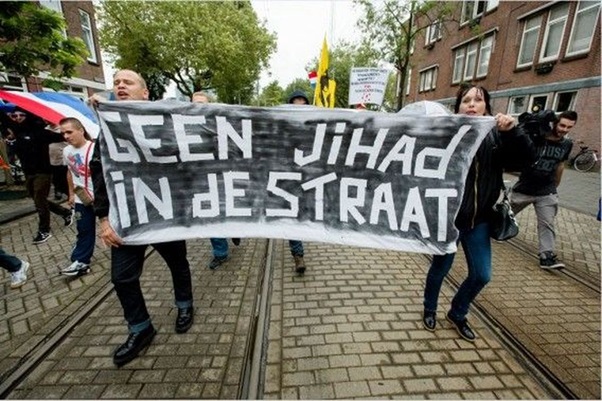 The picture was taken during a public protest in August 2014 by the right wing group Pro Patria. They protested “against IS and radical Muslims” in the Schilderswijk. The protest was a reaction to a march in the neighbourhood in July 2014 to support Gaza, where some boys and men appeared with flags that looked like flags of the Islamic State (IS). It was a relatively small group of protestors, consisting mostly of people coming from elsewhere in the country[1]. This so called “IS-protest” was by no means supported by most of the inhabitants of the Schilderswijk, but images from the protest were widely distributed, portraying the Schilderswijk as a breeding ground of jihadism and Islamic extremism. This fits well in the broader public image of the Schilderswijk as a multicultural “deprived” neighbourhood with many social problems like criminality of “Moroccan boys”, lack of integration, religious extremism, poverty and unemployment. One example of this portrayal is the term “Sharia Triangle”, attributed by journalist Perdiep Ramesar to a part of the neighbourhood where according to him Sharia law was applied. After his article appeared in May 2014, right wing politician Geert Wilders visited the Schilderswijk to make a statement against the “Islamization” of the neighbourhood. Later Ramesar was fired and his articles withdrawn, as newspaper Trouw doubted the reliability of his sources and information.[2] This year, journalist Maarten Zeegers published a book about Muslims in the Schilderswijk and its neighbouring Transvaal, where he portrayed orthodox Muslims as representatives for the whole population in these areas. Furthermore, the fact that he wrote this book undercover makes this a highly problematic publication[3].

Writing about people always involves power. With a book, an article or a report a journalist or researcher is in the powerful position to create a certain image of people and places. As philosopher Michel Foucault argued, knowledge production and power are related with each other. That is, power is exercised through knowledge production, and knowledge production relies on power relations. Knowledge therefore is never neutral. In the case of the Schilderswijk it is an unequal power relation in which the inhabitants are studied or portrayed by people from outside the neighbourhood. They often reproduce a stereotypical image, rather than letting the inhabitants speak for themselves about their diverse experiences and opinions. In fact, many young inhabitants think the stereotypical images of the Schilderswijk are exaggerated, stigmatizing and partial. They claim there is no attention in politics and the media for the positive aspects of the neighbourhood, nor for the majority of the inhabitants who are not extremists but “normal” citizens who want to live peacefully. Therefore, many of them are critical and suspicious of journalists and researchers coming to their neighbourhood. They see journalists, policy makers, politicians and researchers visit their neighbourhood for a couple of hours, looking around and quickly leaving again, and they link these short visits to the negative images about their neighbourhood in the media.

It was in this context that I had to find my own way into the Schilderswijk as a researcher and anthropologist. I had to approach young people and ask them to take part in my ethnographic study, which involved in-depth interviews and participant observations. In my research about girls’ football, gender, religion and ethnicity in urban public spaces I study different girls’ football initiatives in urban neighbourhoods. The Schilderswijk was interesting for my study because it has many initiatives for girls’ football in different spaces: public playgrounds, community centers, youth centers, and a girls’ football competition completely organized by girls from the Schilderswijk themselves, where also some boys are involved. Since this competition strives for gender equality and is connected to other social initiatives in the neighbourhood, such as an active youth center, it proved to be a great place to study how young girls and boys in the Schilderswijk create and contest public spaces, claim their rights and engage with societal issues, all through football. 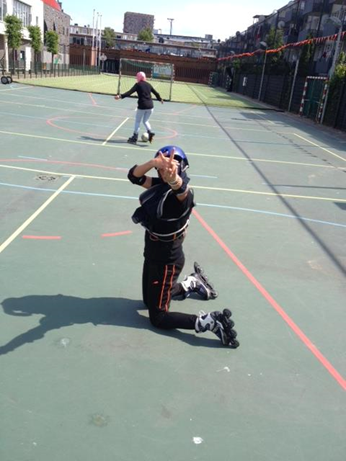 They are also concerned with the negative image of the Schilderswijk and they discuss the power relations involved in research about their neighbourhood and about ethnic minorities. At a debate organized at the youth center about discrimination, one of the footballers, Ilias[4], said that he is fed-up with researchers who publish about ethnic minorities: “The term Moroccans is used too easily, while sometimes it is a Turk or a Tunisian or somebody else. I would like to know where those researchers get their data from!” He referred to the tendency in public debates and in some research publications to swipe all ethnic minorities into one category and to categorize Moroccan-Dutch citizens, often born and raised in the Netherlands, always as “Moroccans” and never as “Dutch”. While Ilias made his statement, the girls who participated in my research laughed and pointed at me, the researcher in the room. I felt uncomfortable, but also motivated to know more about his opinion about researchers in the Schilderswijk.

After the debate, I approached Ilias and asked about his thoughts on me as a researcher studying him and other young people in the Schilderswijk. “But with you it is different”, he responded, “because you are here and you really see what we do”. So what exactly is this difference he mentions? After all, I too was somebody from outside visiting the neighbourhood for my research. The difference, for Ilias and the other research participants, was that I visited the Schilderswijk continuously and spent extensive time participating in the events they organized. I did not start off my research by asking about all the negative issues and problems in their neighbourhood, like religious extremism, criminality and violence. For many young inhabitants, these questions are a sign that the researcher is reproducing the stereotypical image of the neighbourhood without really engaging with their experiences, negative and positive. Rather, I focused on the things they enjoy about living in the Schilderswijk. On how they make friends on the streets and playgrounds. On how playing football is a way for them to make the public space in their neighbourhood inclusive: for girls, for people with different ethnic and religious backgrounds, and for visitors from outside. And on the actions they undertake to improve their neighbourhood and the image of it.

Such a research is not something that can be done quickly or easily. It takes patience and time, building up a relationship of trust with the research participants. It means also doing something back: for example helping them with organizing a big football event. It means engaging in-depth with the daily lives of young people and being aware of the power relations involved in knowledge production. Because I was visible for them, approachable and critical about my own position, the knowledge production about their neighbourhood was something they were actually involved in. In this way, I was able to show the “other” side of living in the Schilderswijk. It is not only doom and gloom. There are many social initiatives and movements, and the streets of the Schilderswijk are a great place for young people and children to play football with their friends. The Schilderswijk is not only a space of contestation or protest, it is for young people above all a space to play.

Elias Brug, a young film maker, also wanted to show this “other” side of the neighbourhood, and in collaboration with young inhabitants he made a positive film about the Schilderswijk. Since I recognize the happiness and hospitality from my own research, I will end this blog with “Happy Faces”[5].

Translation:
“I am Nordin, I am born and raised in the Schilderswijk. I find it a great pity that there is such a negative image created about this neighbourhood. I will therefore say: be welcome in this neighbourhood”.

[4] To protect the anonymity of my research participants this name is a pseudonym.

[5] The producers of the Happy Faces film were not part of my research.